The consignment of one of the rarest patterns of the German 1933 model SS Dagger, with a full Rohm inscription reminds us of Hitler’s plot to ensure his absolute power of Germany. Coming to power officially as Chancellor on January 30, 1933, Hitler

realised the SA and SS Stormtroopers under Ernst Rohm's leadership could cause conflict amongst the powerhouse he was forming. Rohm's views on the direction of Germany was beginning to sway from those of Hitler. Selected SA & SS at this time carried their daggers with a Dedication to their leader Ernst Rohm. On the night of 30th June 1934, Hitler was ready and began his political purge, lasting until 2nd July, history would mark this as the “Night of the Long Knives”.  Ernst Rohm was arrested by Hitler himsef and sortly afterwards executed with a bullet to the heart by  SS-Obersturmbannführer Michael Lippert. Hitler then  began to erase any reminder of Rohm and the order went out to grind his name from the blade of the daggers. It was a brave man who disobeyed a direct order from Hitler, a dagger retaining the full inscription makes this one of the rarest and most desirable of the German Third Reich Daggers.
The example being offered by Bosleys was made by Eickhorn of Solingen and is sold with a Bosleys guarantee of authenticity,  having been examined by the UK's leading authority on the subject. 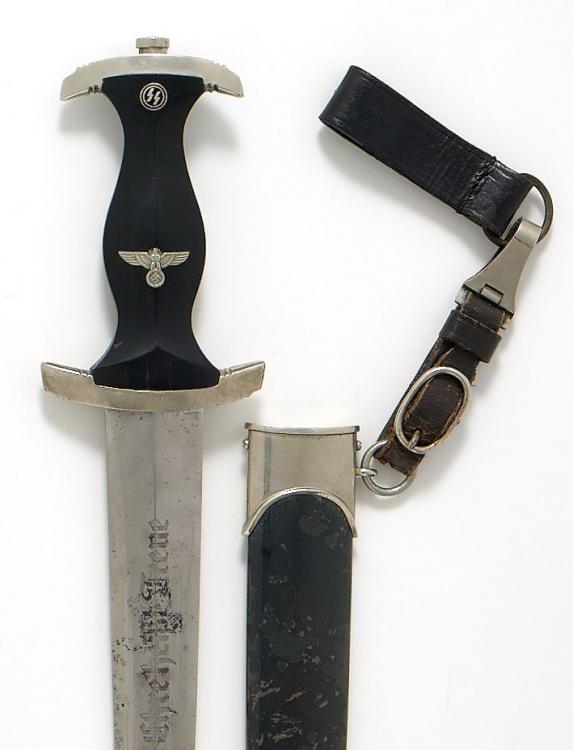