The consignment of a local medal collection containing a WW2 Military Medal awarded to Trooper Anthony Merryweather of the Army Air Corps had thought by the vendor for many years to have been won during the Battle of Arnhem. Detailed research by Bosleys uncovered a far more daring operation, that could only be defined by motto “Who Dares Wins”
Trooper Merryweather volunteered to be part of a six man SAS team that would be the first British “Boots” to land behind enemy lines on D-Day.

Full Story:
The citation for the award of the Military Medal was raised on the 5th November 1945 by Lt. Col “Paddy” Mayne DSO, Countersigned by Brigadier J.M. Calvert DSO Commander of the SAS and confirmed by Field Marshal Montgomery.
On the night 5/6 June 1944 Tpr. Merryweather landed by parachute with a party of 2 Officers and 3 OR’s about 15 miles South of the Cherbourg Peninsula. The party dropped within enemy lines with the task of distracting the Germans from a large scale airborne operation by American Forces to the North. They were told they could expect to be overrun by American troops within 9 days. They waited for six weeks and were captured while trying to reach Allied lines on the 17 July 44. During this period the endured very considerable hardship and danger. They were constantly hunted by the enemy who despatched a Coy. of troops for the purpose. Because they moved at night and had to be constantly about about during the day, they got almost no rest. During the last 3 weeks they lived almost exclusively off raw vegetables. They were seldom over 200 yards from Germans and as the area was packed with enemy troops they were subject to constant shellfire from our guns. They accomplished much valuable sabotage work. Some 8 times Tpr. Merryweather  volunteered to accompany an Officer on sabotage expeditions. In the darkness they passed Germans often at 30 yards, several times fired upon. Four times for food they entered a farmhouse partly occupied by Germans. Once they went 10 miles to collect two escaped American P.O.W’s one so wounded that he had to be carried. Despite the acute nervous and physical strain Tpr. Merryweather showed exemplary fortitude and courage which contributed inestimably to the moral of the party. His determination and audacity were of the highest Quality.”
Trooper Anthony Merryweather was serving with B Squadron 1st SAS when volunteers were called for a special operation in Northern France. Six men were selected for the mission which would be called Operation Titanic, the men saw this name as a clear indication this was going to be a one way ticket mission. The team comprising: Lieutenant Poole (Team Leader), Lieutenant Fowles, Troopers, Dawson, Sanders, Hurst and Merryweather, they were destined to be the first Allied Special Forces SAS Team to parachute on occupied French soil on D-Day leaving the aircraft at 00.20hrs. They were briefed to be dropped in Northern France on the night of the 5th/6th June 1944, south of the main drop zones for the British & American Airborne Forces. They would be dropped from aircraft of 138 Special duties RAF squadron with a mass drop of “Ruperts” the dummy Paratroopers in an attempt to confuse the German command into thinking the mass Parachute drop would be, and was happening to the South. Merryweather’s team after landing would activate speakers to simulate gunfire, remove ballast for weapons containers to fool the Germans into thinking weapons had been distributed and then leg it into the undergrowth and then continue sabotage operations until the link up with US forces within nine days, Simple ! As of all plans this did not go exactly to plan. The team dropped and after landing, it was then discovered that the two Officer’s were no where to be seen and the remaining four were some two miles north of the intended drop zone. The equipment canisters had also gone astray, along with most of their heavy weapons. The team laid twenty Lewis bombs over a 500 square yard area and ignited them. At 3am as it became light they went to ground and hid up the following day, near a road, with orders to attack suitable target, one report claimed the only thing to go past them on that day was a German soldier on his bicycle, he survived to ride another day. In the evening they linked up with the local French Resistance unit and to their delight were reunited with their two Officers. The citation for the Military Medal, clearly indicates the type of sabotage and adventures the team undertook. After six weeks of creating problems for the Germans, who were dedicating more and more resources to their capture, time was running out for the team. On the 17th July they found themselves close to a German position being mortared by American forces, it was decided at nightfall, they would make a break for the Allied lines, however about Midday two German Paratroopers stumbled on their hide, an exchange of fire followed but not before two stick grenades were tossed into the hide, Merryweather taking fragments to his back, two other team members were hit and the group retired to a farm house. Within 30 minutes the Germans had surrounded the farmhouse, after a short fire fight it was obvious that their would be no hope of getting out of this one and the order was given to surrender, a number of the SAS having to be carried out of the farmhouse. The now POW’s were treated well, being offered cigarettes and chocolate. Merryweather was transferred to a German field dressing station and then spent three months in hospital before being liberated by advancing Allied Forces. 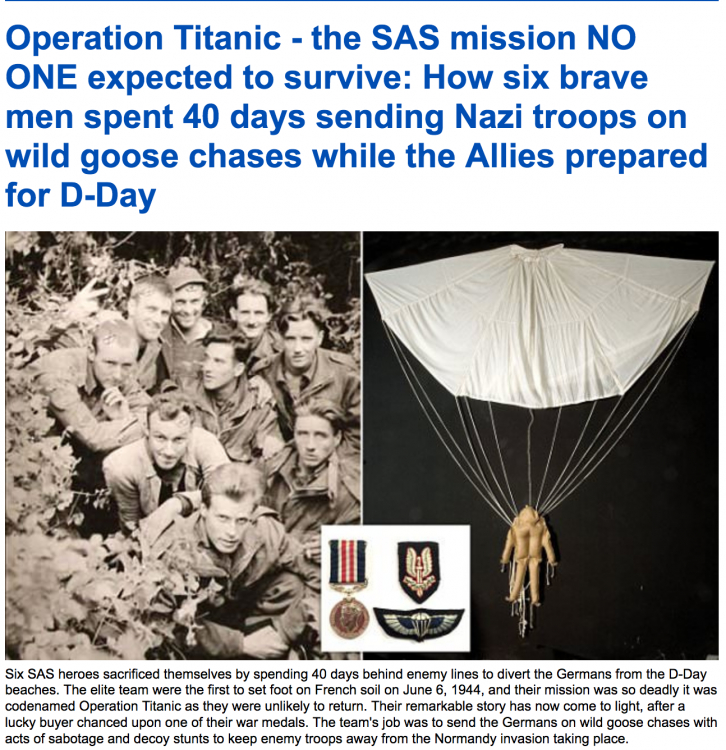 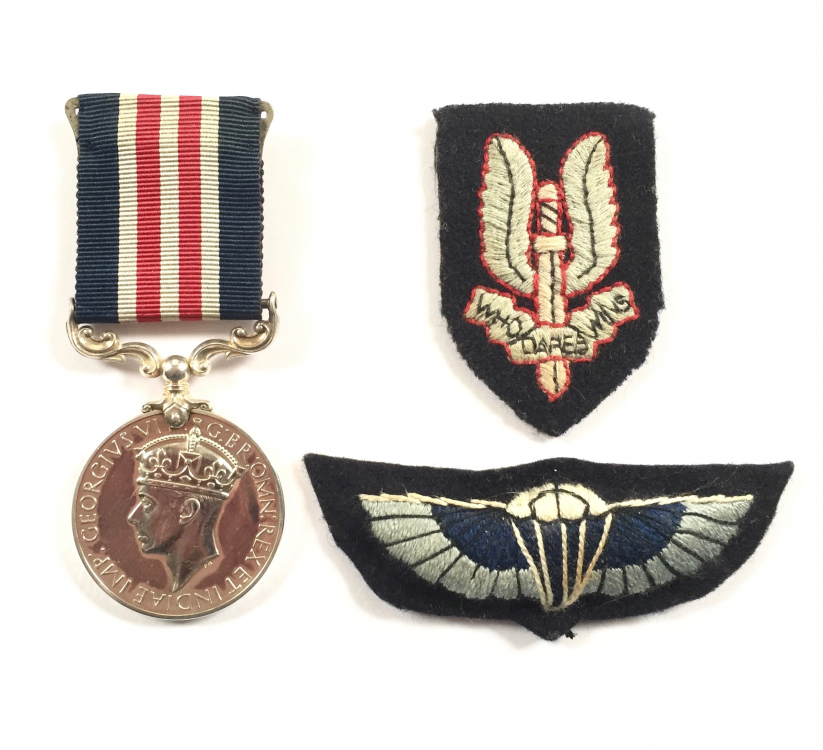 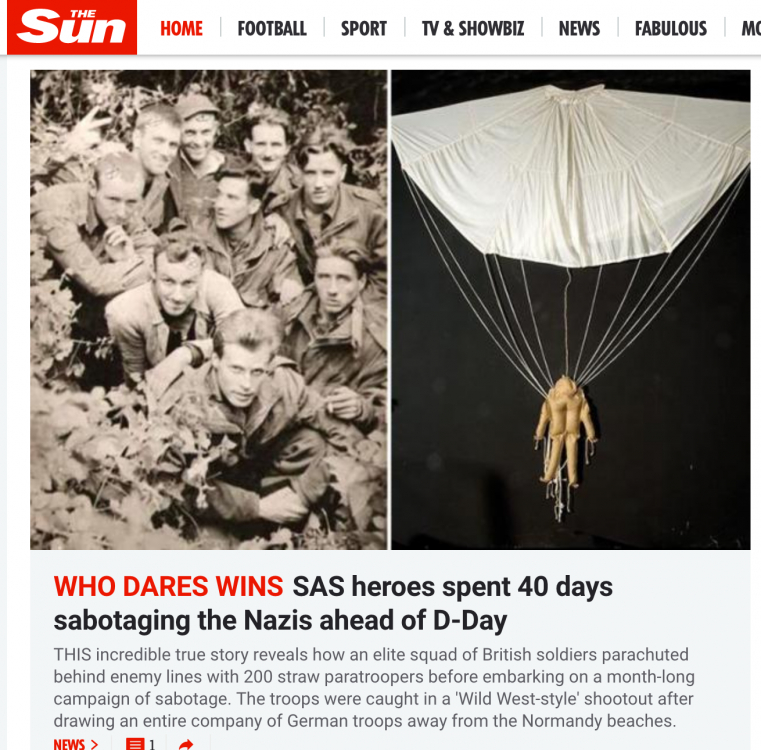 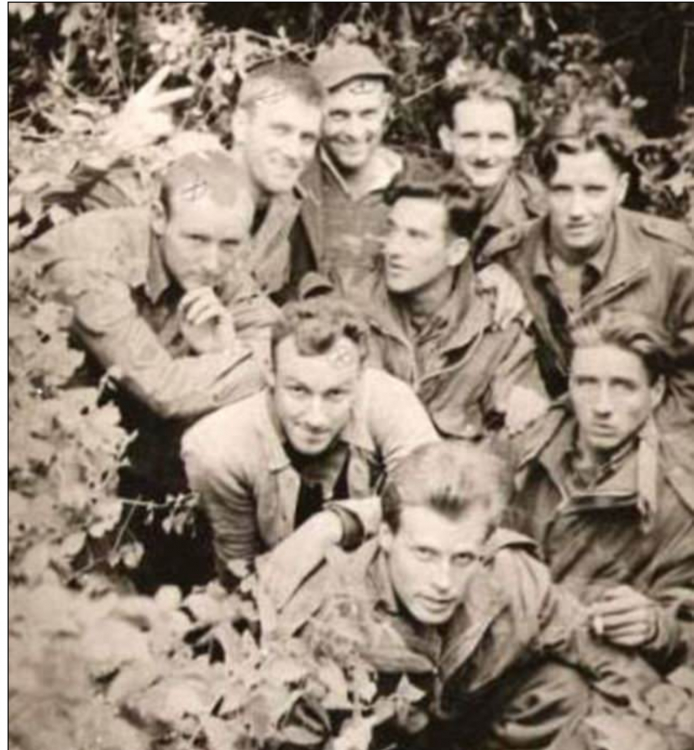