June 30th Auction Has The Touch of the Blarney 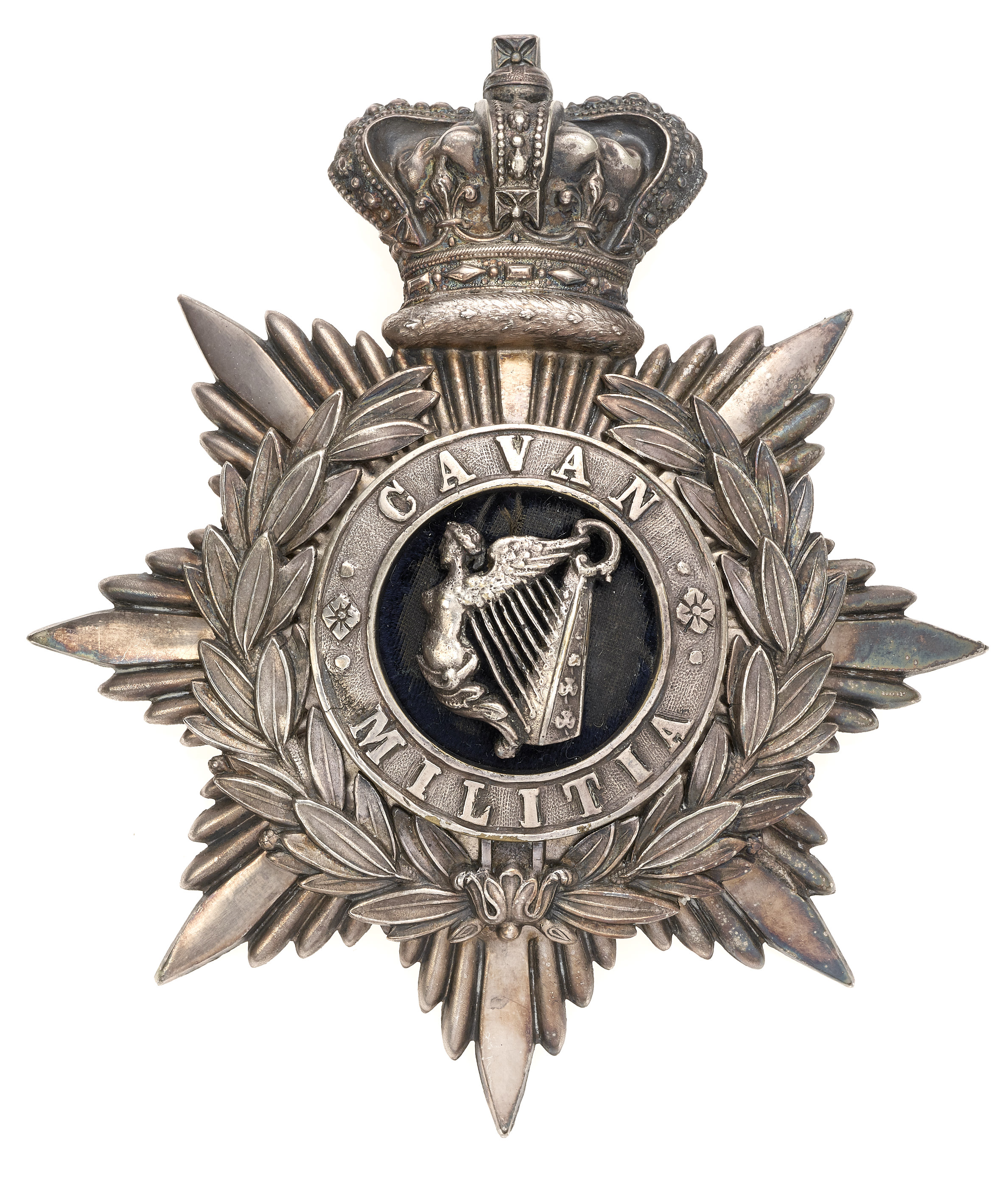 Bosleys auction of 30th June offered 560 selected military collectables from a number of collections which included the fine collection of Irish military badge compiled over a lifetime by Noel Jenkins of Londonderry Northern Ireland. The first 63 lots were dedicated to him and got of to a flying start when lot 1 Cavan Militia Victorian Officer helmet plate circa 1878-81 sold for £600. This set the tone for the sale and other badges included Irish Leitrim Rifles Militia Victorian glengarry badge circa 1874-81 £980,  Irish Kerry Militia 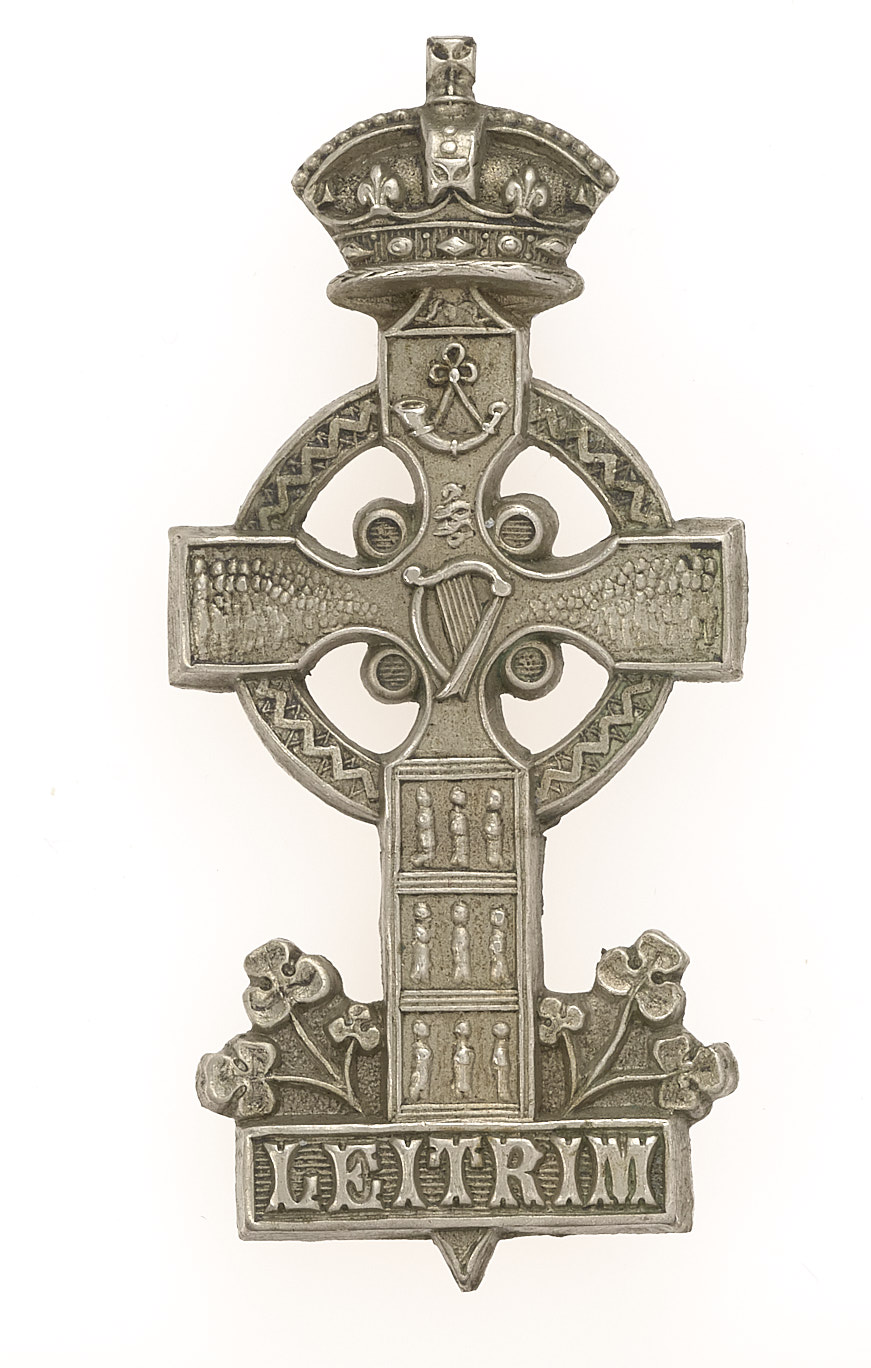 Victorian pair of facing collar badges circa 1874-81 sold for £600. A frame of military badges proved a surprise to another vendor and to Bosleys as it contained an outstanding selection of Georgian Napoleonic war period Irish silver shoulder belt plates and medallions. These featured in lots 94 to 108. and were in demand from international bidders with a hammer price total of £18,870.
The medal section which covered 121 lots contained the second part of a superb collection of Great War multi gallantry medal groups. The highlight of the collection was a WW1 Hampshire Regiment MC, DCM & Bar Long Service Gallipoli & Western Front group which sold for £9,000. Awarded to Captain J.W. Milne MC., DCM his regimental association obituary in 1951 stated  He has always been remembered for magnificent courage and determination in the landings at Gallipoli from the River Clyde during World War 1. From the same collection an impressive WW1 / WW2 20th London, Lancashire 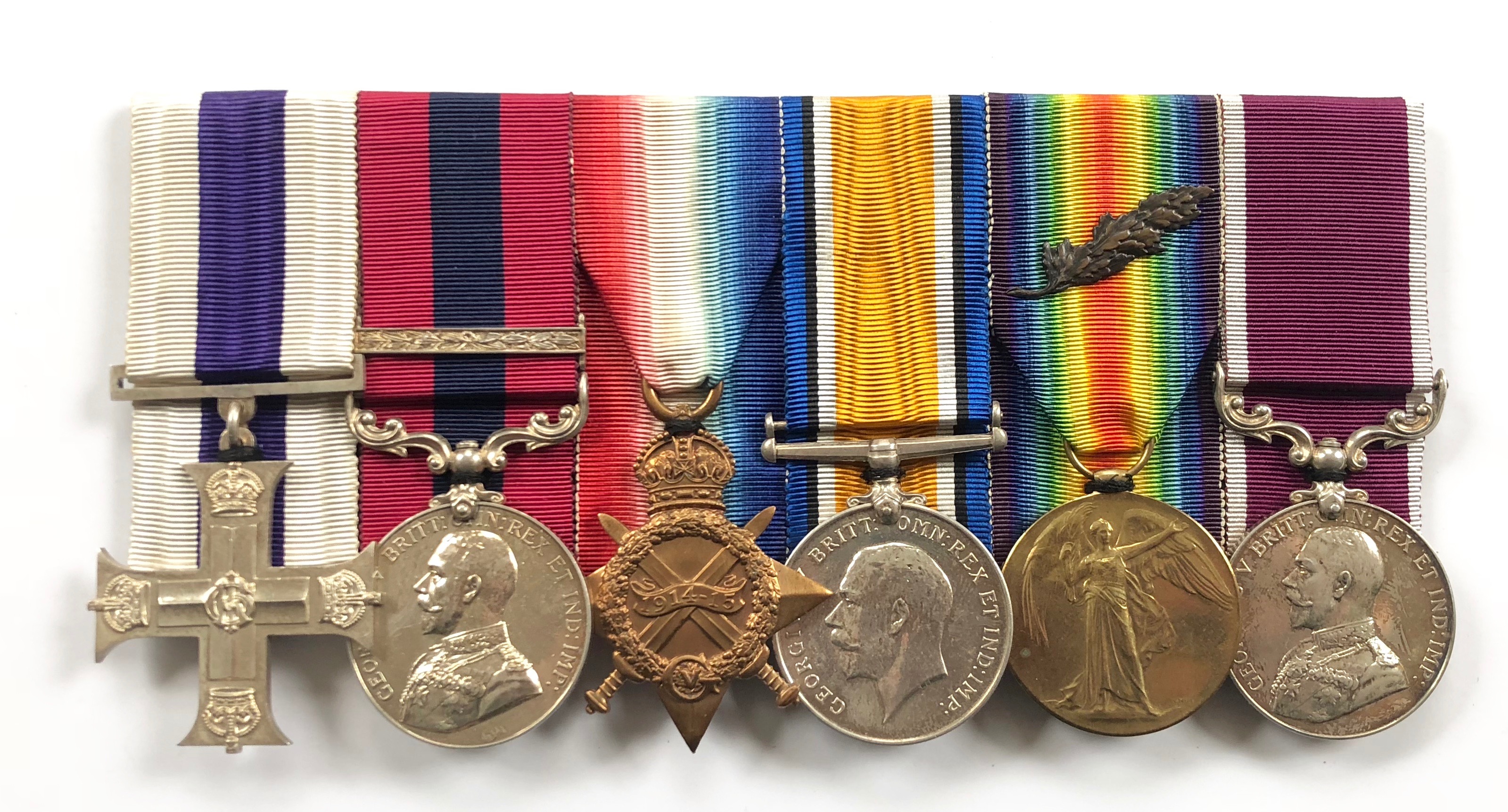 Fusiliers MC, DCM, MID group of nine medals awarded to Major Douglas Louis Waghorn, who was awarded the DCM in 1916 with the 20th (Blackheath and Woolwich) Bn London Regiment and after being commissioned into the Lancashire Fusiliers was awarded the MC for action 1918 sold for £3,400.
The curios section of a Bosleys auction is always interesting to look through with a wide range of items on offer and a rare Boer War  side 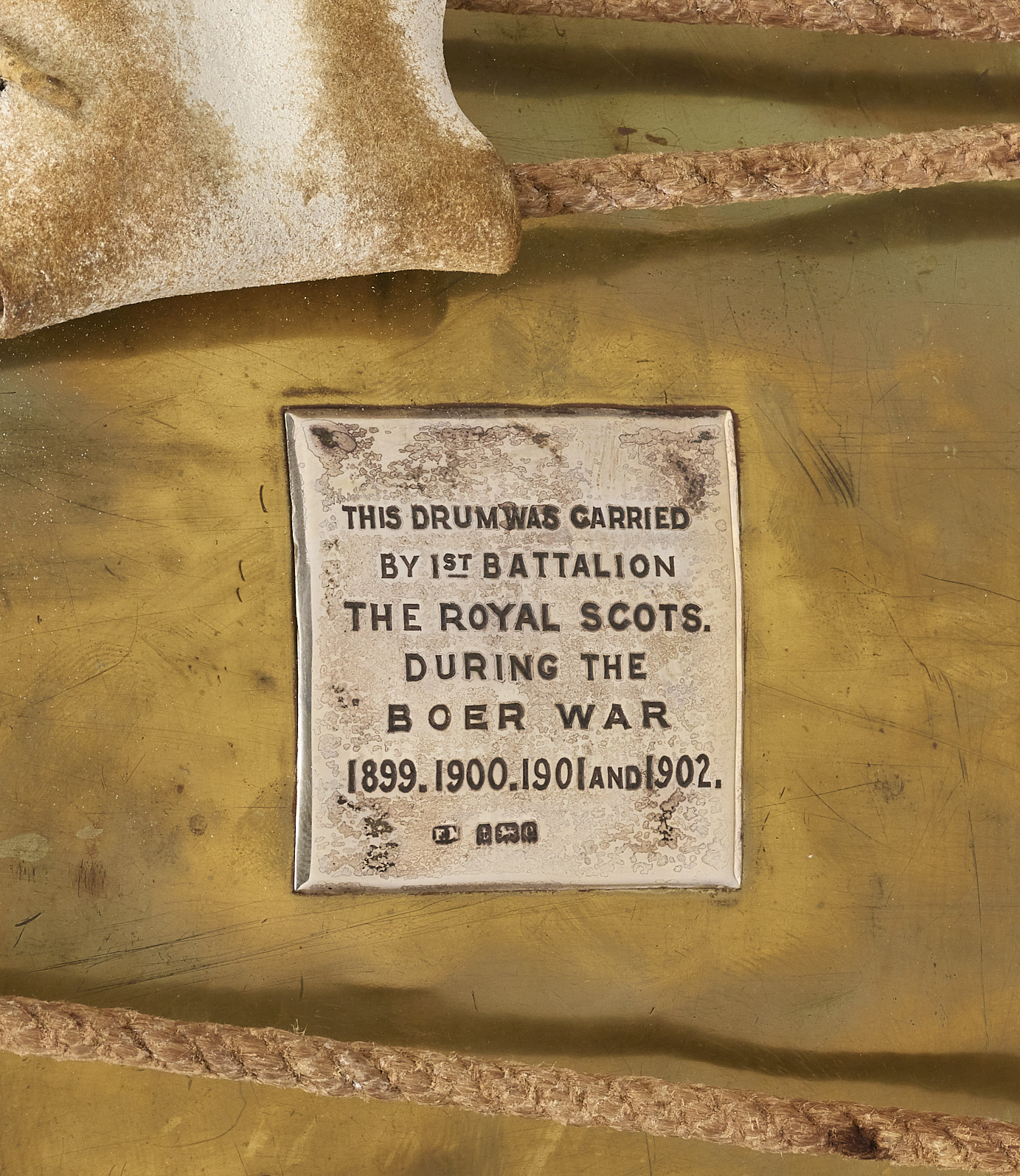 drum carried by a Drummer of the 1st Bn Royal Scots and sporting crude field repairs hammered £1,700 and a Georgian Cavalry Battle Scene Long Case Clock by Alker of Wigan sold for £520.
A very rare early pair of Georgian Royal Navy Captain's gold bullion epaulettes caused an internet bidding battle with the hammer falling at £1,900.
A strong uniform section started with a WW2 Battledress blouse and red beret worn by Lt.Col H.W. Moor DSO.,MC. Royal Engineers Airborne sold for £2,000, but this hammer price was topped by the last uniform of the section Royal Company of Archers Queen Bodyguard for Scotland Victorian full dress coatee which sold for £3,800.
The headdress section saw the first part of a fine collection of British military headdress, this section again getting of to a flying start with a Civil Service Volunteer Rifle Corps Victorian Officer Home Service Pattern Grey Cloth Helmet selling for £1,200. A Victorian Sudan / Boer War Royal Artillery Officer White Foreign Service Helmet, complete with gilt flaming grenade device sold for £1,900, but is was the pomp and ceremony of the Calvary which saw a Fife Light Horse 1871 pattern Victorian Officer helmet selling for £2,400. 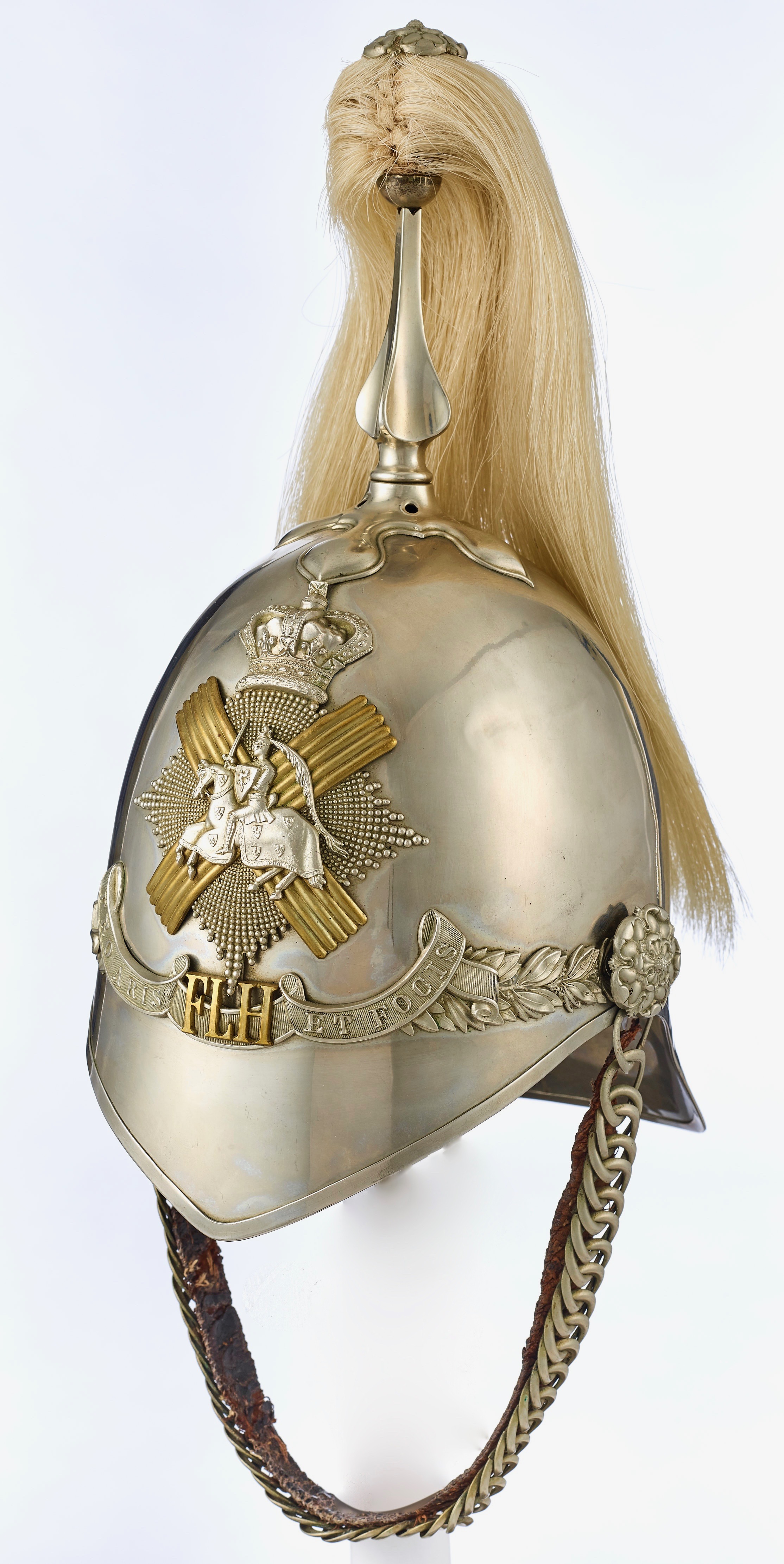 The war history of Samuel Wellington Rushworth a mancunian Territorial with the Royal Artillery who volunteered for the Parachute Regiment and was selected for No1 Squadron 2nd SAS was recorded in an outstanding selection of personal snap shot unpulished photographs showing fellow members of the regiment and his patrol operating behind German lines and later in Norway. This archive featured in the online Daily Mail website and hammered £1,300.
The last sections of the auction cover edged weapons and despite some 8 hours of selling both the UK and overseas bidders were still poised on their computers ready to click that bidding button. A Waterloo Period British Officer 1803 Blue & Gilt Sword £1,300, Royal Navy Victorian (Lead Cutter) Cutlass, a rare mid 19th Century example sold for £460. A 19th Century Japanese Katana Officer Sword, brought back after WW2 by an Officer of the Indian Army sold for £940, but a 19th Century Java / Malay Straight Bladed Executioners Kris brought back by the same Officer  caused an international bidding war with a hammer price of £1,600. Remaining with WW2 a very good example of a 1st pattern Fairbairn-Sykes Commando fighting knife, complete with scabbard sold for £2,600.

Auctioneer Bernard Pass admitted it was a long day of selling, but time flew past every lot contested with multiple bids and some very exciting rallies. "I can’t wait for our next auction which I will be conducting for our sister auction house at Stafford on the 28th July. I hope our bidders will be looking as forward to it as I am.”  he said after this fantastic sale. 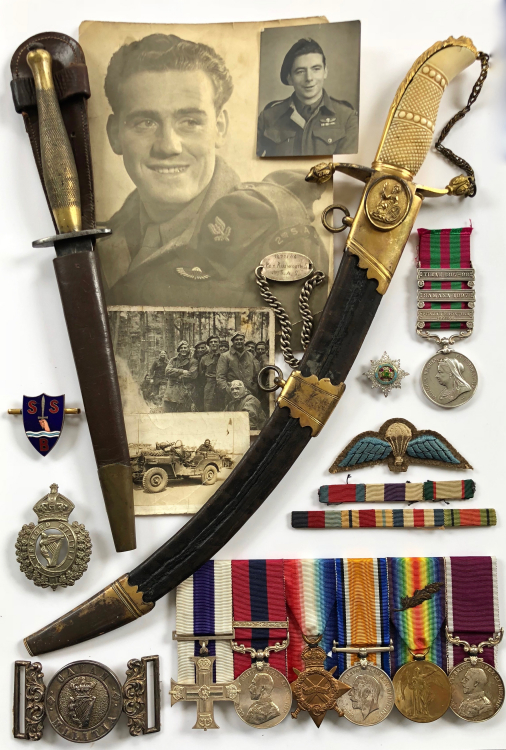 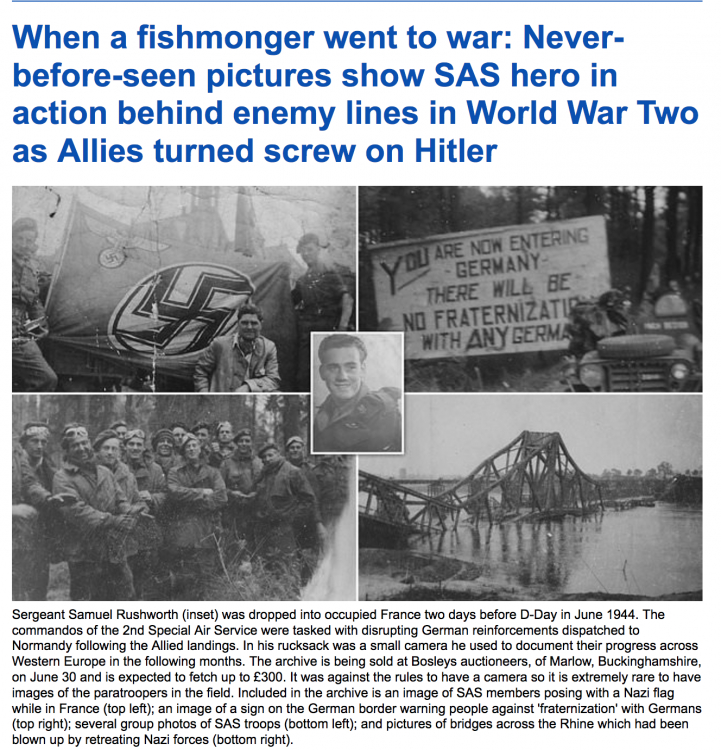 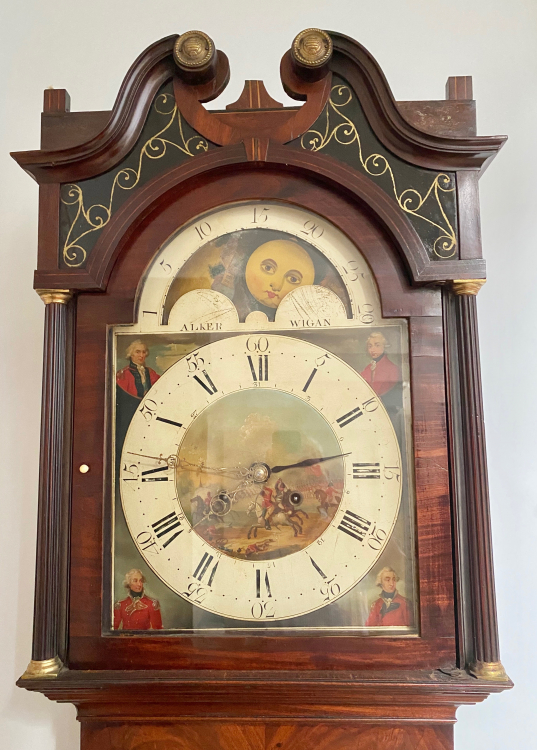